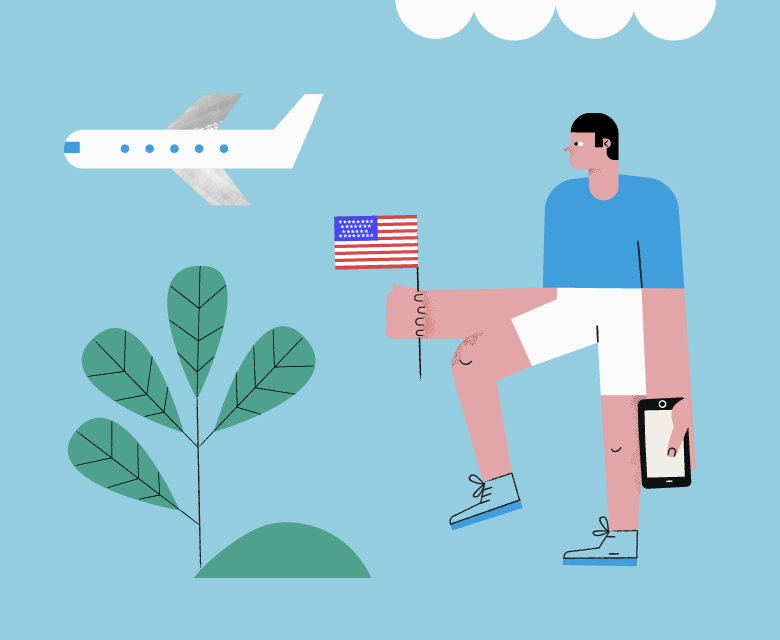 The United States of America, commonly known as either the United States or just America – and often abbreviated as the USA or US – is the world’s foremost economic and military power, with global interests and an unmatched global reach. The third-largest country in both population and land area, the USA is at the heart of global popular culture and sets the pace for both the developed and developing world when it comes to just about anything. Largely because of this, CO2 emissions in the US are much higher than in most areas of the world, even with recent regulations and actions that are starting to take aim at national carbon output. This article describes all aspects of CO2 emissions in the USA and elaborates on various factors that will determine the future of the country’s carbon footprint.

CO2 emissions in the United States per capita

How much GHG does an average person emit in the US? This number is not only the sum of emissions from individual commuting, shopping or energy use. In terms of calculating the average emissions of a citizen, first we need to calculate the total emissions of a country (including the entire amount from industry, transport, and production) and divide this figure by the number of its inhabitants.

In 2020, energy consumption in the United States produced 4.57 million metric tons of carbon dioxide emissions. This means that the average American citizen emits around 13.5 metric tons of CO2 per capita, on average – though this number varies not only from person to person but also year to year. Annual CO2 emissions in the USA per capita have fluctuated substantially in recent years, with a notable slight decrease from 1971 all the way to 2020, with 13.5 tons being significantly lower than the peak of around 20 tons per person late in the 20th century. Still, although the downward trend is encouraging, with a per capita average more than 5 times the global norm Americans still have a ways to go when it comes to reducing emissions.

What creates CO2 emissions in the United States?

In 2020, as the country responded to the COVID-19 pandemic, CO2 emissions from energy consumption in the United States fell to the lowest level since 1983. The 4.6 billion metric tons of CO2 emitted in 2020 was an 11% decrease from 2019, the largest annual decrease on record, according to the Monthly Energy Review.

US petroleum consumption accounted for about 45% of the U.S. total in 2020, with about 77% of petroleum CO2 emissions coming from the transportation sector in the same year.

US natural gas consumption accounted for about 36% of total emissions in 2020, which was the largest share on record. 2020 also saw US coal consumption decrease to about 19% of total CO2 emissions, its lowest share since 1973, the first year these percentages were tracked.

CO2 emissions in the US transport sector

How are goods moved in the US?

Transportation in the United States is facilitated by road, air, rail, and boat through inland waterways and along both coasts (or, in the case of Alaska, the third coast). In descending order, most cargo travels by railroad, then truck, then pipeline, and then boat. Air shipping is less common and is typically only used only for small premium express shipments or perishable items.

How do people travel across the US?

With a great highway system and cheap flight fares, most people travel by car or airplane in the United States. However, there is still the option to take Amtrak, the ubiquitous US train service, which pales in comparison to the European train system – but is still a pretty good way to see the country. By train. Taking a Greyhound, the national and international bus system (that also serves Canada) is also an option, and there are growing ride-share and bike-share systems that are now fairly popular modes of transportation in the US.

Is cycling popular in the United States?

Cycling, also known more simply as biking, is a popular leisure activity and, in many cases, a means of transportation in the US. In 2016, around 12.4% of Americans cycled on a regular basis. The number of cyclists/bike riders in the U.S. increased from around 43 million in 2014 to 47.5 million in 2017, and over 50 million in 2020. Is cycling completely CO2-free? Unfortunately not. A bicycle doesn’t run on petrol, but we do need to provide our bodies with calories to get it moving. Food, its packaging, transportation, and refrigeration – all of these, unfortunately, leave a carbon footprint. Additionally, the production of a bicycle also leaves a carbon footprint. Nonetheless, the bicycle remains the greenest (and healthiest!) mode of transportation mankind has yet invented. How much CO2 do we save by cycling? Over a distance of 10 km compared to a car ride it is already about 2.6 kg CO2! Just imagine how huge a cloud of gas would have to be to become that heavy! Visualizing it helps to realize how huge the real savings are.

Public transportation in the United States

How popular is public transport in the US?

Cars in the US – how important are internal combustion engine vehicles?

Internal Combustion Engine (ICE) cars and light trucks on U.S. roads will climb by 36 million between now and 2030, despite predictions of their rapid replacement by Electric Vehicles. That’s according a new report from Lang Marketing Resources, a leading automotive market intelligence firm with over 30 years of experience in the vehicle products industry.

The dominant ICE share of vehicles in operation (VIO) going forward, recording an approximate 95% share during 2030, will generate robust aftermarket parts and repair volume in the U.S. for many years. Peak ICE, the year when Internal Combustion Engine vehicles reach their maximum number, could arrive as late as 2035.

How many cars are there in the United States?

How many electric cars are there in the US?

Just over 1.3 million vehicles on the road were battery electric vehicles in the US by the end of 2020, according to the International Energy Agency’s Global EV Data Explorer.

Energy sources in the US – what runs the country?

The U.S. Energy Information Administration estimates that an additional 42 billion kWh of electricity generation was from small-scale solar photovoltaic systems in 2020.

Compared to the rest of the world, the US produces a little more energy from RES sources than most countries. While the global average for renewable energy generation on average is around 29%, the United States produces the second most renewable energy by sheer amount at 292 gigawatts (GW), with only China producing more at 895 GW.

American RES: What are the most popular renewable energy sources in the United States?

In 2020, U.S. electricity generation from coal in all sectors declined 20% from 2019, while renewables, including small-scale solar, increased 9%. Wind, currently the most prevalent source of renewable electricity in the United States, grew 14% in 2020 from 2019.

Industry in the United States – an overview

What are the main industries in the US?

According to World Atlas, the main industries in the United States are finance/insurance, manufacturing (durable and nondurable), retail and wholesale trade, and information, with a big chunk of the nationwide industry focused on Health and Social Care and the Federal Government itself. There has been a significant shift in the US workforce away from manufacturing as these jobs have moved either overseas or towards automation, but there still remains a large manufacturing sector in the country, and this may actually begin to have an increasing role in the near future as automation makes production even less expensive than hiring workers in other countries with lower wages.

What can be done to lower CO2 emissions in the United States?

The United States has done a surprisingly good job of reducing emissions per person and as a whole over the past few decades – even if we do not account for skewed 2020 data, which saw a dramatic reduction in emissions from the COVID-19 lockdown restrictions. However, while the country seems to be heading in the right direction, despite the common perception, more can always be done from a country that still produces double-digit per capita emissions measurements. Reducing CO2 is a task we must undertake together, across all regions and borders – and the United States has the potential to be a real leader on this issue. Global success in achieving climate goals depends as much on the government as it does on businesses and individuals – without multifaceted cooperation, we have no chance of reducing our emissions.