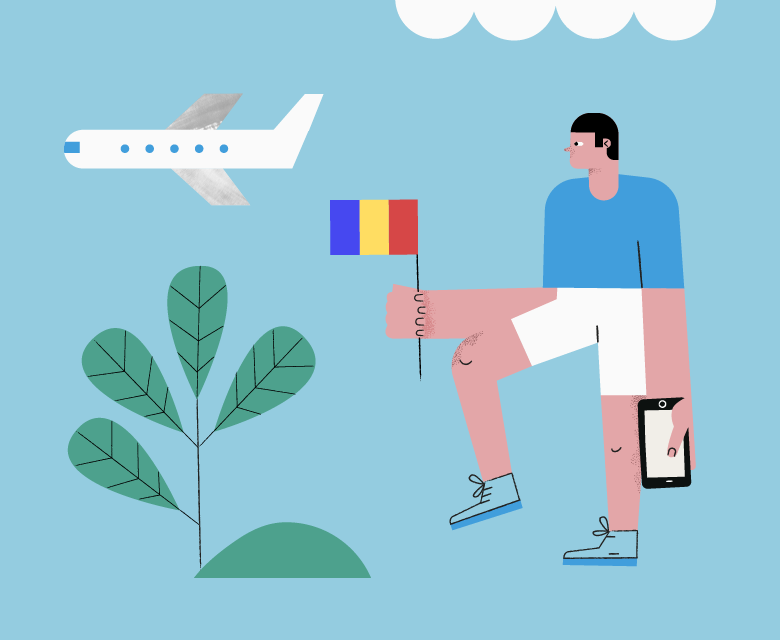 Romania is a country at the confluence of Central, Eastern, and South-eastern Europe. It borders Bulgaria to the south, Ukraine to the north, Hungary to the west, Serbia to the southwest, Moldova to the east, and the Black Sea to the southeast. It has a predominantly temperate-continental climate, and an area of 238,397 km2 (92,046 sq. mi), with a population of around 19 million. Romania is the twelfth-largest country in Europe and the sixth-most populous member state of the European Union. Its capital and largest city is Bucharest; other major urban areas include Iasi, Cluj-Napoca, Timisoara, Constanta, Craiova, Brasov, and Galati. Romania is a developing country, with a high-income economy, ranking 49th in the Human Development Index. It has the world’s 45th largest economy by nominal GDP. Romania experienced rapid economic growth in the early 2000s; its economy is now based predominantly on services. It is a producer and net exporter of machines and electric energy through companies, this inevitably entails an increasing level of CO2 emissions in Romania. This article describes the level of CO2 emissions in Romania in detail and elaborates on various factors determining it.

CO2 emissions in Romania per capita

How much GHG does an average person in Romania emit? This number is not only the sum of emissions from individual commuting, shopping, or energy use. In terms of calculating the average emissions of a citizen, first, we need to calculate the total emissions of a country (including the entire industry, transport, and production) and divide this figure by the number of its inhabitants.

An average Romanian person emits about 10.54 kg CO2 into the atmosphere daily. Annual CO2 emissions in Romania per capita sum up to about 3.85 tonnes, Romania still needs to work harder on reducing.

What constitutes our CO2 emissions? There are many factors, the most important of which are industry, transport, and energy production. The average Romanian person is aware of the fact that humanity has to take action if we want to protect our climate: most Romanian citizens admit that the situation on Earth is serious and requires immediate action. However, to the same question, few Romanian citizens answered that they are not sure about the human impact on climate change – we hope that this article will at least slightly change the point of view of the latter part of respondents.

Most Romanians don’t have cars, so the country is literally designed around trains, light rail, and bus networks. Utilizing Romania’s mass transportation system is easy, affordable, and far safer than driving. Furthermore, Bus is the most popular way of transportation in Romania.

Road transport and Cycling in Romania

Cycling is not popular among Romanians although it’s gaining popularity. Most Romanians over the age of 18 (68%) believe that the personal car is the safest form of transportation on Risk Perception and Insurance Culture in Romania. Public transport comes next (11%), followed by bicycles (9%).

In the 18-50 age group, the personal car is preferred by a larger proportion of the population (77%), but the bicycle comes second (8%), followed closely by public transport (7%).

Industry and construction accounted for 32% of gross domestic product (GDP) in 2018, a comparatively large share even without taking into account related services. The sector employed 26.4% of the workforce. Romania was Europe’s sixth-largest producer of automobiles.

The average co2 emissions per capita in Romania was about 3.85 tons co2e in 2018, meaning that every Romanian citizen has an opportunity to contribute to reducing the climate change impacts by changing some habits which impact on increasing the co2 emissions. the average electricity consumption per capita was about 2842 kwh/year in Romania, Romanian citizens can reduce their emissions by about 1.5 tons co2e by reducing the electricity consumption by 50% or using a renewable source of electricity. In Romania, buses are the most popular form of transport, So if the individual takes a decision to still take a bus instead of riding his vehicle, he will reduce his daily emissions. some minor changes can result in a huge effect.