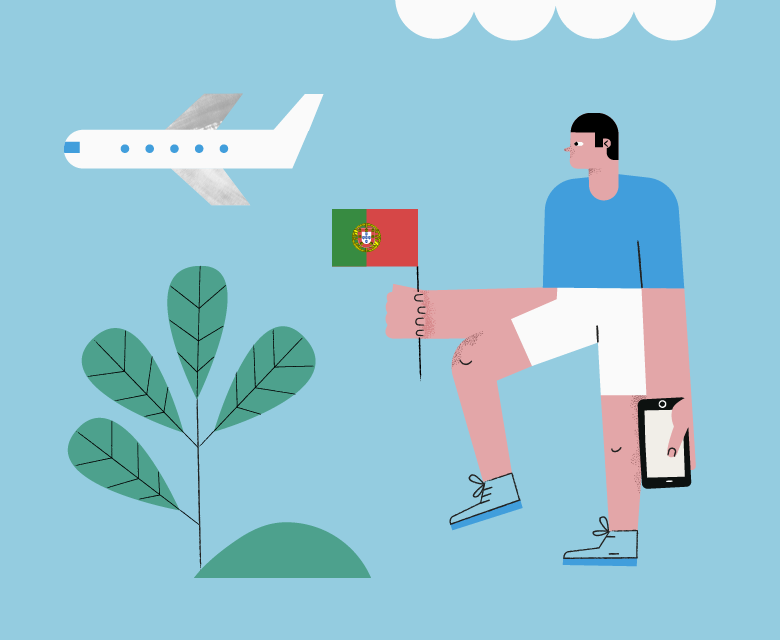 Portugal is a European Union country and located on the Iberian Peninsula, in the westernmost in mainland Europe, bordered to the west and south by the Atlantic Ocean and to the north and east by Spain, the sole country to have a land border with Portugal.

Portugal’s territory also includes the Atlantic archipelagos of the Azores and Madeira, both autonomous regions with their own regional governments. Portugal is a developed and high-income country. Most industries, businesses, and financial institutions are concentrated in the Lisbon and Porto metropolitan areas – the Setúbal, Aveiro, Braga, Coimbra, Leiria, and Faro districts are the biggest economic centers outside these two main areas.  Agricultural products accounted for 4% of the national GDP. As well, Portugal has had a strong tradition in the Portuguese fishing sector and is one of the countries with the highest fish consumption per capita. Portuguese-processed fish products are exported through several companies, under a number of different brands and registered trademarks, such as Ramirez, the world’s oldest active canned fish producer. Portugal is rich in its lithium subsoil which is used in batteries for electric vehicles and for storing electricity from the power grid inevitably entails an increasing level of CO2 emissions in Portugal. This article describes the level of CO2 emissions in Portugal in detail and elaborates on various factors determining it.

CO2 emissions in Portugal per capita

How much GHG does an average person in Portugal emit? This number is not only the sum of emissions from individual commuting, shopping, or energy use. In terms of calculating the average emissions of a citizen, first, we need to calculate the total emissions of a country (including the entire industry, transport, and production) and divide this figure by the number of its inhabitants.

An average Portuguese person emits about 13.26 kg CO2 into the atmosphere daily. Annual CO2 emissions in Portugal per capita sum up to about 4.84 tonnes, Portugal still needs to work harder on reducing.

What constitutes our CO2 emissions? There are many factors, the most important of which are industry, transport, and energy production. The average Portuguese person is aware of the fact that humanity has to take action if we want to protect our climate: most Portuguese citizens admit that the situation on Earth is serious and requires immediate action. However, to the same question, few Portuguese citizens answered that they are not sure about the human impact on climate change – we hope that this article will at least slightly change the point of view of the latter part of respondents.

Portugal has subway systems in the two largest metropolitan areas: Lisbon Metro and Metro Sul do Tejo in the Lisbon metropolitan area and Porto Metro in the Porto Metropolitan Area. All major cities and towns have their own local urban transport network, as well as taxi services.

Road transport and Cycling in Portugal

Cycling is not popular among Portugueses although it’s gaining popularity. Portugal’s Algarve region is one of Europe’s sunniest beach and golf locations, and also one of its most sought bicycle destinations. Bicycle mode-share is above average for Portugal, and the Algarve has been at the forefront of Portugal’s cycle tourism effort since the start. Is cycling completely CO2-free? Unfortunately, not. A bicycle doesn’t run on petrol, but we do need to provide our bodies with calories to get it moving. Food, its packaging, transportation, and refrigeration – all of these, unfortunately, leave a carbon footprint. Additionally, the production of a bicycle also leaves a carbon footprint. Nonetheless, the bicycle remains the greenest (and healthiest!) mode of transportation mankind has yet invented. How much CO2 do we save by cycling? Over a distance of 10 km compared to a car ride it is already about 2.6 kg CO2! Just imagine how huge a cloud of gas should become to be that heavy! Visualizing it helps realize how huge the real savings are.

Portugal has considerable resources of wind and river power, the two most cost-effective renewable energy sources. There has been a trend towards the development of the renewable resource industry and reduction of both consumption and use of fossil fuels. In 2006, the world’s largest solar power plant at that date, the Moura Photovoltaic Power Station, began operating near Moura, in the south, while the world’s first commercial wave power farm, the Aguçadoura Wave Farm, opened in the Norte region (2008). By the end of 2020, 70.65% of the country’s electrical production was from fossil fuels, coal (2.85%) and fuel Oil power plants (41.91%) and Natural Gas (25.87%), while 5.35% were derived from hydroelectric dams, 7.5% by wind and solar energy, and 25.87% biofuels.

The industry in Portugal is diversified, ranging from automotive (Volkswagen Autoeuropa and Peugeot Citroën) and bicycles, aerospace (Embraer and OGMA), electronics and textiles, to food, chemicals, cement, and wood pulp. Furthermore, Travel and tourism continue to be extremely important for Portugal where it is among the top 20 most-visited countries in the world, Portugal was elected The Best European Country by USA Today. also elected as both Europe’s Leading Destination and in 2018 and 2019, elected as a World’s Leading Destination.

The average co2 emissions per capita in Portugal was about 4.84 tons co2e in 2018, meaning that every Portugal citizen has an opportunity to contribute to reducing the climate change impacts by changing some habits which impact on increasing the co2 emissions. the average electricity consumption per capita was about 4677 kwh/year in Portugal, Portugal citizens can reduce their emissions by about 0.935 tons co2e by reducing the electricity consumption by 50% or using a renewable source of electricity. In Portugal, buses, trains are the most popular form of transport, So if the individual takes a decision to still take a bus instead of riding his vehicle, he will reduce his daily emissions. some minor changes can result in a huge effect.