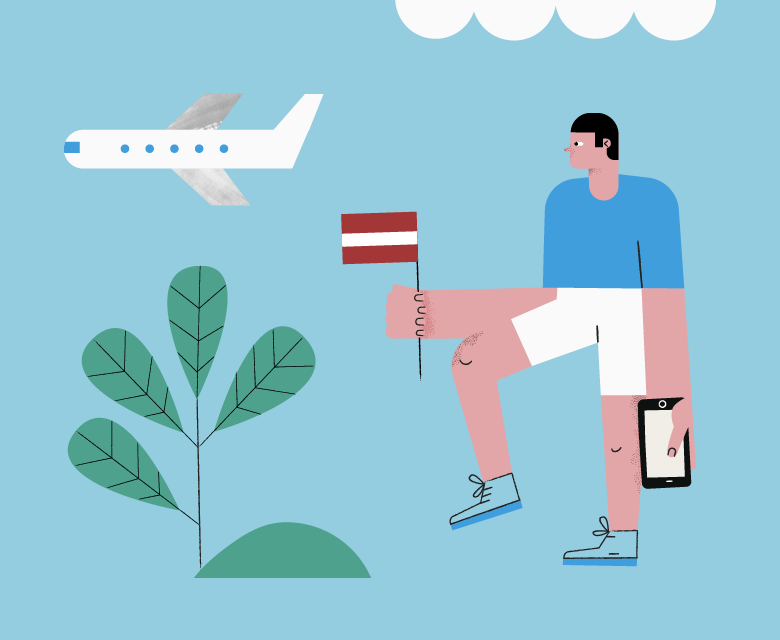 Latvia officially known as the Republic of Latvia, is a country in the Baltic region of Northern Europe. It is one of the Baltic states; and is bordered by Estonia to the north, Lithuania to the south, Russia to the east, Belarus to the southeast, and shares a maritime border with Sweden to the west. Latvia covers an area of 64,589 km2 (24,938 sq mi), with a population of 1.9 million. The country has a temperate seasonal climate. Its capital and largest city is Riga.

Latvia is a developed country, with a high-income advanced economy, ranking very high in the Human Development Index. Latvia is a member of the European Union, Eurozone, NATO, the Council of Europe, the United Nations, the Council of the Baltic Sea States, the International Monetary Fund, the Nordic-Baltic Eight, the Nordic Investment Bank, the Organisation for Economic Co-operation and Development, the Organization for Security and Co-operation in Europe, and the World Trade Organization. Since the year 2000, Latvia has had one of the highest (GDP) growth rates in Europe. Latvia has the fifth highest proportion of land covered by forests in the European Union, after Sweden, Finland, Estonia and Slovenia. Forests account for 3,497,000 ha (8,640,000 acres) or 56% of the total land area. The transport sector is around 14% of GDP. Transit between Russia, Belarus, Kazakhstan as well as other Asian countries and the West is large. this inevitably entails an increasing level of CO2 emissions in Latvia. This article describes the level of CO2 emissions in Latvia in detail and elaborates on various factors determining it.

CO2 emissions in Latvia per capita

How much GHG does an average person in Latvia emit? This number is not only the sum of emissions from individual commuting, shopping, or energy use. In terms of calculating the average emissions of a citizen, first, we need to calculate the total emissions of a country (including the entire industry, transport, and production) and divide this figure by the number of its inhabitants.

An average Latvian person emits about 11.18 kg CO2 into the atmosphere daily. Annual CO2 emissions in Latvia per capita sum up to about 4.08 tonnes, Latvia still needs to work harder on reducing.

What constitutes our CO2 emissions? There are many factors, the most important of which are industry, transport, and energy production. The average Latvian person is aware of the fact that humanity has to take action if we want to protect our climate: most Latvian citizens admit that the situation on Earth is serious and requires immediate action. However, to the same question, few Latvian citizens answered that they are not sure about the human impact on climate change – we hope that this article will at least slightly change the point of view of the latter part of respondents.

Most Latvians don’t have cars, Utilizing Latvia’s mass transportation system is easy, affordable, and far safer than driving. Furthermore, Railway is the primary public transportation from Riga to the nearby cities and towns in Latvia. Latvian Railway’s main network consists of 1,860 km of which 1,826 km is 1,520 mm Russian gauge railway of which 251 km are electrified, making it the longest railway network in the Baltic States.

Road transport and Cycling in Latvia

Cycling is not popular among Latvians although it’s gaining popularity. There is 4.2% of people bicycles daily in Riga and of those using bicycles once a week is 18.2%. According to regular survey data, the number of cyclists in Riga has increased five times in 2013 compared to 2008.

The major industries in Latvia are textiles, processed wood products, processed foods, chemicals, metalwork, and machine building. Latvia builds both small and big machines such as railway cars, buses, washing machines, and radios. The chemical industry makes up a huge chunk of exports.

The average co2 emissions per capita in Latvia was about 4.08 tons co2e in 2018, meaning that every Latvian citizen has an opportunity to contribute to reducing the climate change impacts by changing some habits which impact on increasing the co2 emissions. the average electricity consumption per capita was about 3595 kwh/year in Latvia, Latvian citizens can reduce their emissions by about 0.35 tons co2e by reducing the electricity consumption by 50% or using a renewable source of electricity. In Latvia, Trains are the most popular form of transport, So if the individual takes a decision to still take a Bus/Train instead of riding his vehicle, he will reduce his daily emissions. some minor changes can result in a huge effect.