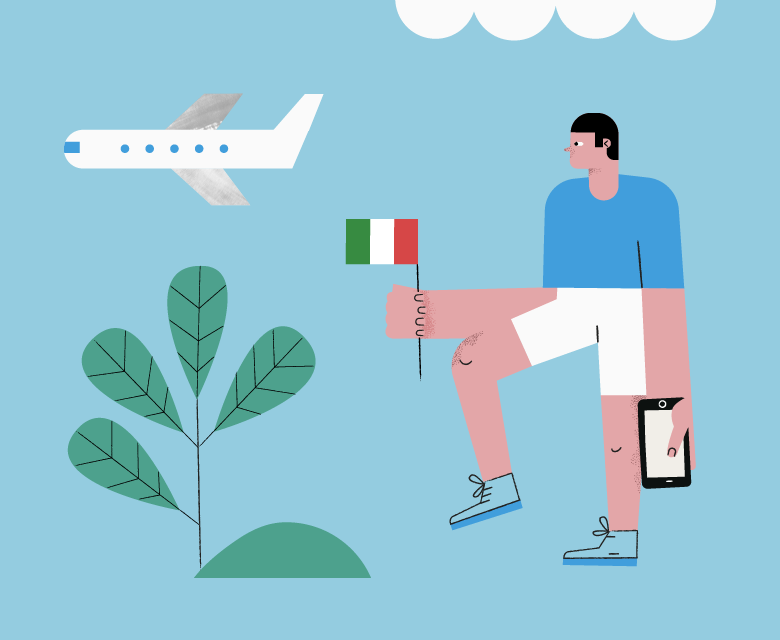 Although many things have been invented here that life is hard to imagine without, such as musical instruments, ice cream and pizza, the coffee machine is considered to be the greatest Italian invention (built in 1884 by Angelo Moriond). This may suggest that there are more coffee drinkers in the world than gourmets or music lovers. Much depends on how and where the coffee is produced and how and in what we drink it, but the carbon footprint of a cup of espresso is around 0.28kg CO2e.

Italy is the beautiful home of many artworks and fashion houses, including high quality footwear – it is itself shaped like a shoe with a high upper and hardly anyone is unfamiliar with its contours. The country is surrounded by the Mediterranean Sea, more precisely by its four basins: the Adriatic, Ionian, Ligurian and Tyrrhenian, in which the Italian islands drift, the most famous of which are Sicily, Capri and Elba. On land, it is bordered by France (Europe’s highest peak is Mont Blanc), Switzerland, Austria and Slovenia, while inside its borders are two enclaves: the oldest republic in the world, San Marino, and the smallest state in the world, the Vatican City, which is an absolute theocratic monarchy with an elected throne. 80% of Italy is made up of mountains, with the Po Valley stretching to the north-east of the country. The climate, although varied, is considered very favourable and attracts tourists all year round. So do active volcanoes, potential emitters of large quantities of CO2. But what is responsible for Italy’s biggest emissions? And what is the plan to fix it?

Italy’s per capita CO2 emissions and the reduction plan

The Italian population represents about 13.5% of the European Union population and performs slightly better (lower) in terms of per capita greenhouse gas emissions (by 1.3 tCO2e in 2019) than the European average. The most important greenhouse gas here is CO2, accounting for 81.2 of the country’s total emissions. Carbon dioxide emissions per capita were 5.03 tonnes CO2e in Italy in 2020. In the same year, Italy produced 287.1 million metric tonnes of emissions of this gas (MtCO2). Italy’s carbon dioxide emissions experienced a period of significant growth between 1970 and 2005, increasing by almost 50% to a peak of 470.2 MtCO2. Since then, emissions have fallen significantly, boosted by the increased use of renewable energy sources such as wind and solar. Between 1990 and 2019, Italy reduced its GHG emissions excluding LULUCF (land use and forestry) emissions and removals by 19.4% and the share of renewable energy was 18.27%.

Italy plans to cut carbon emissions by around 60% by 2030 having used €80 billion ($96 billion) of EU funds for energy transition for the next five years, signed off by Ecology Minister Roberto Cingolani. The Italians are undoubtedly extremely ambitious compared to other member states. Their very first plan, Il Piano Nazionale di Ripresa e Resilienza, has already set aside funds to the extent of 222.1 billion euros for the country’s ecological transformation, thus becoming the most expensive national recovery plan in the entire European Union. All that remains is to wait for the next plan and concrete proposals that will allow Italy to reach the 60% reduction ceiling, which, even given its high ambition and strong determination, may prove very difficult.

CO2 emissions in Italy in the transport sector

Transport is the largest source of greenhouse gas emissions in Italy. Compared to 1990 they are still slightly higher. Emissions from international maritime and air transport have doubled over these 30 years. In this respect, Italians need to do an enormous amount of work to reverse this trend.

Italy is already experiencing an increase in climate change and warming compared with Europe, and it would be worthwhile for it to use the resources set aside wisely and to focus on creating clear policy recommendations and reliable ways of monitoring progress.

Italians should, for example, keep a close eye on whether car manufacturers are successful in bringing plug-in cars to market and focus on introducing targeted numbers of low- and zero-emission car models. The regulator should also take steps to shift freight transport from lorries to electric trains and ensure that car passengers shift to public transport and bicycles.

This requires investment in high quality infrastructure, reducing the number of parking spaces and increasing parking charges, facilitating the use of short- and long-distance car and ridesharing schemes, or abolishing tax breaks for company cars.

On the subject of energy sources and energy consumption, Italy compares very favourably with the countries of the European Union. Italy’s per capita energy consumption is almost 20% lower than the EU average (2.3 toe in 2020). More than a third of the electricity produced in Italy comes from green sources. Hydropower invariably dominates, followed by solar, photovoltaic, bioenergy, wind and geothermal energy. Italy is the third largest producer of renewable energy in Europe. In this competition, Italians have always been at the forefront of Europe and even the world. In fact, they are improving their results year by year.

Water, sun, wind and the heat of the earth are the main energy sources that Italians use, creating an important alternative to fossil fuels. They are strategic resources, although not the only ones. Renewable energy is an intensely developing field, just think of the increasingly widespread use of wave and tidal energy – indeed, countries as favourably located as Italy are privileged here.

The distribution of resources determines how energy is produced in the various regions:

The renewable energy landscape is rich and being intensively refined to optimise costs without sacrificing efficiency.

A relatively large number of projects being developed aim to harness energy from ocean currents, waves, tides and salinity levels, as well as ocean thermal energy conversion, which uses the temperature difference between the surface and depth of the water to generate power.

In Italy, the transport sector accounts for the largest share of total emissions, as already mentioned. Almost the same amount is accounted for by so-called “other emissions”, mainly including buildings and services. Although both areas are on a downward trend, two other sectors have contributed to the largest emission reductions over the period 2005-2019.

One of these is the energy sector described above. It managed to reduce its emissions by
42%, while emissions from manufacturing and construction fell by 47% over the same period. These significant reductions reduced these sectors’ share of total emissions by 5% and 4% respectively.

The waste sector reduced its emissions by 23%, maintaining a share of around 4% over the period. The share of total emissions related to industrial processes remains stable, while this sector’s emissions decreased by 27%.

In Italy, several legislative and strategic updates on climate action have been made in recent years, mainly focused on reducing air pollution and supporting decarbonisation efforts. The effects of these efforts are indeed already noticeable. Air pollution limits are mostly exceeded in Italian urban areas, which is where Italians struggling to meet their targets should focus their efforts in the next decade.