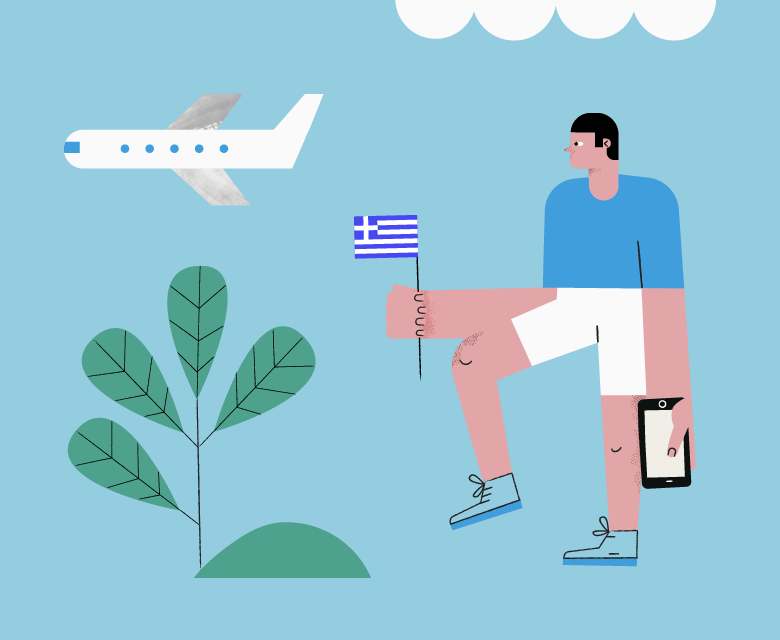 Greece is a European Union country and located in Southeast Europe. Greece is a developed country with a high standard of living and a high ranking in the Human Development Index. Its economy mainly comprises the service sector (85.0%) and industry (12.0%), while agriculture makes up 3.0% of the national economic output inevitably entails an increasing level of CO2 emissions in Greece. This article describes the level of CO2 emissions in Greece in detail and elaborates on various factors determining it.

Greece’s population is about 10.7 million as of 2018; Athens is its largest and capital city. Greece features a vast number of islands – between 1,200 and 6,000, – 227 of which are inhabited – and is considered a non-contiguous transcontinental country. Crete is the largest and most populous island. Eighty percent of Greece is mountainous, with Mount Olympus being the highest peak at 2,918 meters (9,573 ft).

CO2 emissions in Greece per capita

How much GHG does an average person in Greece emit? This number is not only the sum of emissions from individual commuting, shopping, or energy use. In terms of calculating the average emissions of a citizen, first, we need to calculate the total emissions of a country (including the entire industry, transport, and production) and divide this figure by the number of its inhabitants.

An average Greek person emits about 16.6 kg CO2 into the atmosphere daily. Annual CO2 emissions in Greece per capita sum up to about 6.08 tonnes, Greece still needs to work harder on reducing.

What constitutes our CO2 emissions? There are many factors, the most important of which are industry, transport, and energy production. The average Greek person is aware of the fact that humanity has to take action if we want to protect our climate: most Greek citizens admit that the situation on Earth is serious and requires immediate action. However, to the same question, few Greek citizens answered that they are not sure about the human impact on climate change – we hope that this article will at least slightly change the point of view of the latter part of respondents.

Most of the Greek islands and many main cities of Greece are connected by air mainly from the two major Greek airlines, Olympic Air and Aegean Airlines. Maritime connections have been improved with modern high-speed craft, including hydrofoils and catamarans. While railway connections play a somewhat lesser role in Greece than in many other European countries, but they too have also been expanded, with new suburban/commuter rail connections. Furthermore, Bus is the most popular way of transportation in mainland Greece.

Road transport and Cycling in Greece

Cycling is not popular among Greeks although it’s gaining popularity. The island of Kos is about the most bicycle-friendly place in Greece, as is anywhere flat, such as the plains of Thessaly or Thrace.

Important Greek industries include tourism, and merchant shipping, while the country is also a considerable agricultural producer (including fisheries) within the union. Shipping remains one of the country’s most important industries, accounting for 4.5 percent of GDP, Greek companies control 16.2% of the world’s total merchant fleet making it the largest in the world[viii].

The average co2 emissions per capita in Greece was about 6.08 tons co2e in 2018, meaning that every Greek citizen has an opportunity to contribute to reducing the climate change impacts by changing some habits which impact on increasing the co2 emissions. the average electricity consumption per capita was about 5005 kwh/year in Greece, Greek citizens can reduce their emissions by about 4.8 tons co2e by reducing the electricity consumption by 50% or using a renewable source of electricity. In Greece, buses are the most popular form of transport, So if the individual takes a decision to still take a bus instead of riding his vehicle, he will reduce his daily emissions. some minor changes can result in a huge effect.