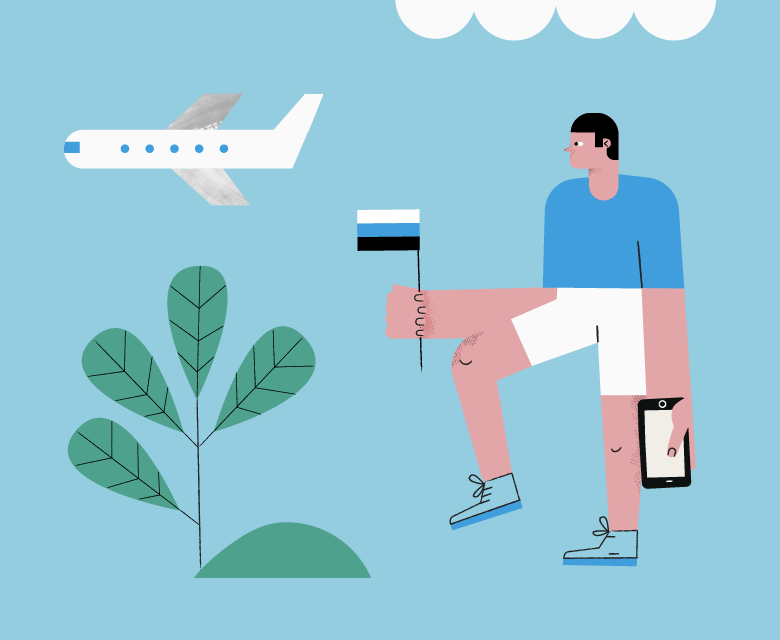 Estonia is a beautiful gem nestled along the Baltic coast, the most northerly of the three Baltic states, with linguistic ties to Finland which sits just across the bay. Since regaining its independence with the collapse of the Soviet Union in 1991, Estonia has become one of the most economically successful of the European Union’s newer eastern European members. The country has over 2000 islands, ample, uncrowded green spaces, free public transport for locals, two UNESCO World Heritage sites, online voting, and offers e-citizenship to “digital nomads” that want to work remotely and call Estonia home for a while. On top of all this prosperity that came out of independence, Estonia has also done a great job of reducing emissions in the country and per capita: CO2 emissions in Estonia are still about three times higher per capita than both Baltic neighbours Latvia and Lithuania, but they have reduced by nearly half since the fall of the Soviet Union. This article describes all aspects of CO2 emissions in Estonia and elaborates on various factors that will determine the future of the country’s carbon footprint.

CO2 emissions in Estonia per capita

As stated above, CO2 emissions in Estonia are still relatively high per capita, but they are decreasing – and they are not as impactful on the world since there are only a little over a million people in the entire country. Still, like almost everywhere else, there remain many areas that need improvement when it comes to energy usage and access to clean energy.

How much GHG does an average person emit in Estonia? This number is not only the sum of emissions from individual commuting, shopping, or energy use. In terms of calculating the average emissions of a citizen, first we need to calculate the total emissions of a country (including the entire amount from industry, transport, and production) and divide this figure by the number of its inhabitants.

According to the World Bank, CO2 emissions per capita in Estonia were 22.32 tons in 1990, which was not only high for the global average but also dwarfed Latvia and Lithuania, with each of these countries having much lower 7.05 and 8.71 tons, respectively. By 2020, emissions in Estonia dropped to 12.10 tons per capita, reducing nearly 50% of total and per capita emissions in the country in less than 30 years.

What creates CO2 emissions in Estonia?

Close to 80% of Estonia’s CO2 emissions come from burning oil shale for electricity, and oil shale contributes significantly to other pollution and waste levels in the country. Carbon taxes are affecting electricity production as it is getting very expensive – and new renewable energy sources are beginning to emerge. However, the oil shale industry in Estonia is heavily subsidised and the industry enjoys exceptional marginal resource and water costs, which allows for electricity to be sold below its actual cost. This is hindering further adoption of more solar and other renewable energy sources.

The other roughly 20% of CO2 emissions in Estonia are from transport at around 12%, manufacturing industries at around 5%, and residential buildings at 2.5%, with all other sectors making up the remaining amount.

Near the end of the previous decade, CO2 emissions from Estonia’s transport industry hovered around 10% – 15%. Although these numbers have fluctuated since the country gained independence, it tended to increase between 1995 and 2020.

Is cycling popular in Estonia?

Yes! Cycling is becoming more and more popular in Estonia. It is an ideal country for travelling by bike, with short routes, diverse scenery, great local culture,, privacy, and – perhaps most importantly – a continuously developed network of bike roads that support this environmentally friendly mode of transport in every way. Estonia is also a safe place for taking bicycle trips, as the main roads are all paved and have sparse traffic, yet they still pass through the core of populated urban areas.

How popular is public transport in Estonia?

Estonia has one of the best public transport systeims in Europe – if not the world – and it is very popular with residents. The bus, trolleybus and streetcar network is wide, punctual and reliable in Tallinn and in most parts of the country in general. On top of that, the trams are new and well-maintained, passengers usually get a seat – and public transit is free for residents!. Estonia became the first country with free public transport nationwide after implementing the free-fare system in Tallinn in 2013, with the rest of the 15 counties following suit over the ensuing years.

Cars in Estonia – how important are internal combustion engine vehicles?

How many cars are there in Estonia?

Estonia registered 1.05 million cars in 2019. which was an increase from the previous record of 980,873 for 2018. This equals to a little less than one car per person in the country.

The number of Registered Vehicles in Estonia is updated yearly, and has averaged 618,200 units between 1990 and 2019, with the lowest recorded number coming in the initial year of counting at 333,000 units in 1990.

How many electric cars are there in Estonia?

Energy sources in Estonia – what runs the country?

In 2018, oil shale accounted for 72% of Estonia’s total domestic energy production, 73% of total primary energy supply and 76% of electricity generation, which is a significant drop over the past 10 years. In most countries covered by the International Energy Agency, (IEA), energy consumption is decoupled from economic growth and population, but this is not yet the case for final energy consumption in Estonia. However, the country appears to be on the brink of a major energy transition that will involve substantially reducing the role of domestically produced oil shale in the country’s future energy mix. The transition will require Estonia to carefully balance social, environmental, economic and energy security considerations.

Estonian RES: What are the most popular renewable energy sources in Estonia?

While oil has been and continues to be the dominant source of energy – with natural gas also increasing in recent years – Estonia is pushing for renewable uptake over the past few years, with plans to continue pursuing more renewable options. Solar energy is booming in Estonia and is expected to intensify after 2020 due to the requirements for near-zero energy buildings, but large-scale energy production is hampered by the market situation.

Industry in Estonia – an overview

What are the main industries in Estonia?

The main industries in Estonia are engineering, electronics, wood production, textile production, information technology, and telecommunications. It has an “ease-of-doing-business” rank of 18th for the entire world, which is remarkably high in comparison to surrounding countries and regions. In 2018 total exports topped €14.4 billion, with a significant dip in 2020 due to COVID, and potential lingering effects of the pandemic will likely hurt export numbers for several years after 2020.

What can be done to lower CO2 emissions in Estonia?

Estonia is lagging behind the rest of the EU and needs to do more to reduce CO2 emissions quickly. Not only is more renewable capacity needed, but there needs to be a better plan to cut reliance on shale oil and gas. Fortunately, since Estonia has such a small population the country’s overall contribution to global greenhouse gas emissions will remain small even if they do not reach the targets and goals that they set – though it would serve the country and its citizens well to do everything they can to reach the goals set forth by the EU and the climate pledge adopted by the rest of the world.

Reducing CO2 is a task we must undertake together, across all regions and borders – and Estonia has the potential to be a real leader on this issue. Global success in achieving climate goals depends as much on the government as it does on businesses and individuals – without multifaceted cooperation, we have no chance of reducing our emissions.