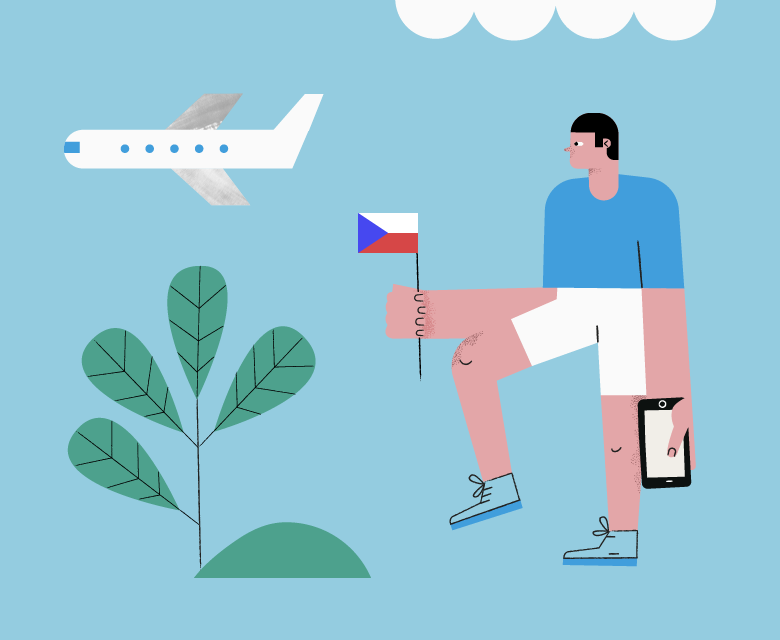 The Czech Republic is a stable democratic state, a member of the UN, OECD, EU and NATO and other international organisations. This landlocked country, 326 km from the Baltic Sea and 322 km from the Adriatic Sea, lies on the border of two European mountain systems, the Alpine-Himalayan and the Hercynian, in central Europe and covers an area of 78,866 km2. It borders with Germany, Poland, Austria as well as with Slovakia with which it formed Czechoslovakia until 1993. The highest point is Sněžka (1 602 m) and the lowest point is where the river Elbe flows out of Czech territory (117 m). More than 50% of this population of ten million describe themselves as agnostic or atheist, in the north of the country this group makes up 75% of the population. With 31.7% of believers, Czechs are among the least religious nations in Europe. Compared to the rest of Europe, unemployment rates are low, education levels are high. Czechs also top the rankings for beer consumption per capita. The Czech economy is considered one of the most stable of all the post-socialist countries. Despite its heavy reliance on coal-fired power generation, the Czech Republic plans to move quickly away from this energy model. The share of coal (hard coal and lignite combined) at 47% ranks the Czech Republic second after Poland (73.6%) in the EU in terms of the use of this raw material in electricity production. The reduction of coal mining is dictated by the EU climate policy and the need to meet climate commitments to reduce CO2 emissions.

The National Energy and Climate Plan of the Czech Republic was prepared on the basis of Regulation (EU) 2018/1999 of the European Parliament and of the Council of 11 December 2018 on the governance of the energy union and climate action. It contains the main assumptions for all five areas of the energy union for the period 2021-2030 with a perspective extending to 2050. The plan sets out the Czech Republic’s contribution to the European climate and energy targets for reducing greenhouse gas emissions, increasing the share of renewable energy sources and increasing energy efficiency.

The European target for reducing greenhouse gas emissions is set at 43% compared to 2005 in sectors covered by the EU ETS and at 30% in sectors outside it. The Czech Republic’s target is to reduce total GHG emissions by 30% by 2030 compared to 2005, corresponding to a reduction of 44 million tonnes of CO2e. According to emission projections, a 34% reduction in GHG emissions (compared to 2005) will be achieved by 2050 through the implementation of policies and measures included in the National Plan.

The Czech Republic is striving at the EU forum to have nuclear energy classified as a green energy source, which would allow it to receive funds for the expansion of this type of energy. This stance meets strong opposition from countries such as Austria, which also opposes the expansion of nuclear power plants in its neighbourhood. The decisive factor for increasing the share of nuclear energy in the energy mix will be the EC’s approval of the state aid declared in the contract with ČEZ for the expansion of another nuclear reactor at the Dukovany plant. The Czech government’s desire to strengthen its position in negotiations on the development of nuclear energy in the EU, as well as to gain access to the Fair Transition Fund (FST), was the reason why it withdrew its opposition to EU climate targets. Although as recently as June 2019, the Czech Republic, together with Estonia, Hungary and Poland, blocked a political agreement in the European Council on the issue of the EU achieving climate neutrality by 2050. Later they accepted it.

CO2 emissions in the Czech Republic per capita

The Czech Republic’s 10.6 million people represent 2.4 of the total population of the European Union, and its CO2 emissions of 12.3 tonnes per capita place it third in the ranking of EU countries. Although between 2015 and 2018, the rate of reduction of greenhouse gas emissions of a Czech resident was similar to that of a statistical EU citizen, it started to decrease in 2019. However, the difference in the amount of gases emitted remained stable, at 4t CO2e per capita in 2005, four years later at 0.1t CO2e less.

CO2 emissions in the Czech Republic in the transport sector

The transport sector with emissions of 18.77 million tonnes of CO2e is a huge area for optimisation. Czechs are buying more and more cars (more than 6 million compared to 2.4 million in the 1990s), average distances travelled are increasing and emissions are rising with them. Studies show that this trend will continue and within a decade, by the end of 2030, emissions from transport on Czech roads will have increased by 20%. These could be partly reduced by increasing the efficiency of combustion engines, wider use of biofuels, compressed natural gas (CNG, use of which increased from 150 to 1,800 new registrations in the past decade) and liquefied natural gas (LNG), or plug-in hybrid vehicles (PHEV).

The average age of a passenger car in the Czech Republic is 14.8 years, which means that a Czech’s car is almost 11 years older than a car of a statistical EU resident. Petrol is the most common fuel, used in 64% of passenger cars on Czech roads. The share of electric vehicles is less than 1%. Decreasing emissions would require a shift to battery electric vehicles (BEVs), assuming the production of electricity to charge vehicles without producing greenhouse gases, and the decarbonisation of the automotive supply chain.

Electric vehicles may become the preferred and economical alternative for the Czech Republic as well, if the costs of operating and owning them continue to fall. And here comes an aspect which applies in every country, not only in the European Union. Information and education campaigns encouraging a change in behaviour, as well as appropriate infrastructure supporting new habits may influence more frequent use of public transport, own bikes or car sharing.

Given the country’s dense rail network, shifting transport and logistics from road to rail can also bring major environmental benefits.

According to the McKinsey report, the Czech Republic would be able to almost completely decarbonise transport by 2050 by switching the car fleet completely to BEV and FCEV vehicles and electrifying the remaining rail transport.

Energy sources in the Czech Republic

The energy, manufacturing and industrial processes industries account for 60% of the Czech Republic’s total emissions. Over the past 15 years, emissions from the energy industry have fallen by 20%, reducing the sector’s share of total emissions by 8%. EU legislation allowed the Czech Republic to increase emissions until 2020, with the country committed to cutting emissions by 14% in the next decade compared to 2005. As the Czech economy is dependent on coal, the Czechs see the development of nuclear energy as an essential part of the transition. A strongly energy-intensive industry is the main reason why the Czechs look poor compared to Europe. In 2018, the Czechs achieved a 15% share of renewable energy sources. The target of 22% by 2030 means increasing the share of advanced biofuels, solar and wind energy. Energy efficiency measures focus on building stock, cogeneration, support measures for industry and households.

Industry in the Czech Republic

The industrial sector comprises numerous sub-sectors, ranging from steel and cement production to plastics, fuel and food and clothing production. The main sources of industrial emissions include fuel combustion to produce industrial heat and greenhouse gases emitted during raw material processing. In the European Union, emissions from industry accounted for 26% of total emissions.

The Czech Republic reduced its industrial emissions between 1990 and 2017 by 54%. However, the industrial sector still accounted for 28% of total emissions. The largest contribution came from the iron and steel subsectors (24%), concentrated in two plants in the Moravian-Silesian region.

Decarbonising industry is relatively difficult primarily due to technical barriers to reducing industrial GHG emissions. Reducing emissions from raw materials usually requires changing production processes. Not all emission-free high-temperature heat technologies are commercially available. Industrial processes are deeply integrated and can rarely be changed in isolation. There are few natural opportunities for large capital-intensive conversions or upgrades as asset lifetimes often exceed 50 years. Adopting more expensive low-carbon processes can put manufacturers at a competitive disadvantage, especially since many products manufactured in the Czech Republic are price-competing goods on the international market. Increased production costs cannot be realistically passed on to customers.

The Czechs will undoubtedly consider alternative solutions to meet their obligations, such as building recycling, switching to zero CO2 electric furnaces, boilers and pumps, and capturing and reusing emissions in industrial plants. The implementation of changes will certainly be subject to the local availability of appropriate infrastructure.

Industry, transport, renewable energy sources, lifestyle of inhabitants – these are only some of the aspects that influence the overall picture of emissions in the Czech Republic. The progress and significant changes in policy in recent years do not rule out the possibility of meeting climate commitments, but also mean intensive work in the coming decades. One of the most important changes is the “Circular Czech Republic 2040” programme, which focuses on the whole economy. A number of new programmes have emerged that focus on financing innovation and development, supporting stakeholders and their transition to a circular economy, such as increasing cooperation between academia and business, strengthening innovative infrastructure investments, technology transfer, improving energy efficiency, waste prevention and creating closed-loop businesses. At the policy level, there are still a number of barriers in terms of human resources, regulations, technology, market readiness, administrative procedures and targeted funding for eco-innovation and the circular economy. Nevertheless, there is considerable interest from businesses, NGO representatives and support agencies who recognise the urgent need to move towards a circular economy.