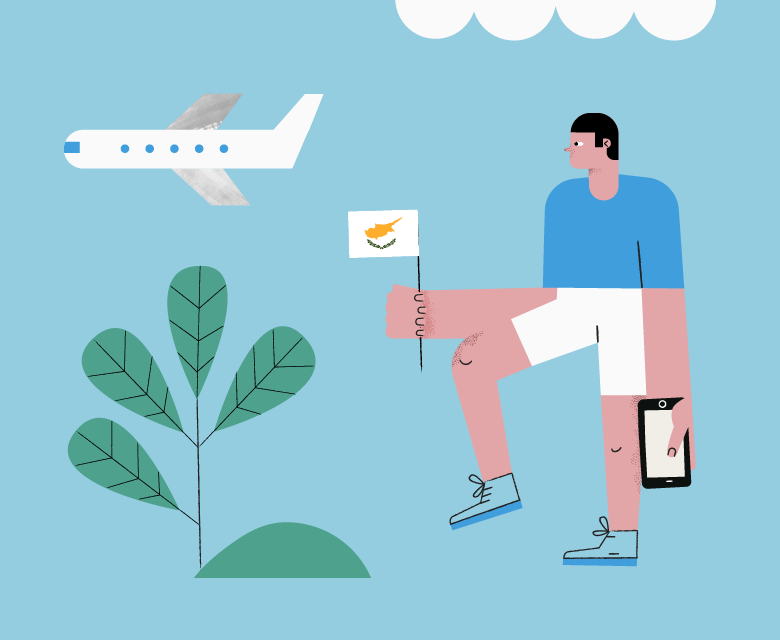 A beautiful island in the Mediterranean Sea, split between two languages and two cultures and nestled in an area that could be considered Europe or Western Asia depending on how you define the regions: this is Cyprus, a unique country that is part of the European Union but is also geographically part of the Middle East.  The third-largest island in the Mediterranean by land area, Cyprus has a total population of about 1.2 million people, with just under 80% identifying as Greek Cypriots, and the vast majority of the remaining citizens identifying as Turkish Cypriots – but when it comes to CO2 emissions, everyone is part of the same group. CO2 emissions in Cyprus are relatively low per capita for a developed country – and overall emissions are very low overall due to the country’s size. This article describes all aspects of CO2 emissions in Cyprus and elaborates on various factors that will determine the future of the country’s carbon footprint.

CO2 emissions in Cyprus per capita

As stated above, CO2 emissions in Cyprus are relatively low per capita, which is even more meaningful since there are only a little more than a million people in the entire country: overall emissions in Cyrpus are some of the lowest in the entire world for a developed country. Still, there are many areas that need improvement when it comes to energy usage and access to clean energy.

How much GHG does an average person emit in Cyprus? This number is not only the sum of emissions from individual commuting, shopping, or energy use. In terms of calculating the average emissions of a citizen, first we need to calculate the total emissions of a country (including the entire amount from industry, transport, and production) and divide this figure by the number of its inhabitants.

According to the World Bank, CO2 emissions per capita in Cyprus reached 5.19 tons in 2020. Emissions have fluctuated substantially in the country over the past decade or so, but there has been a steady statistical increase from the early 1970s up until 2020, reaching the highest point of 5.19 tons of CO2 per capita in this year.

What creates CO2 emissions in Cyprus?

Cyprus accounts for 0.26% of total EU carbon emissions, and the country has reduced emissions at a slower pace than the EU average. The electricity sector, gas and water sector, and the metal and non-metal products sector generate the highest CO2 emissions within Cyprus economy.

Cyprus is a relatively small island and it has no working railway system. This means that various other methods of transport are needed to ensure the proper delivery of any cargo since the last railway was dismantled in 1952. Now, the only remaining modes of transport within the country are by road, with all goods shipped in by sea or by air.

How do people travel across Cyprus?

Again, since the railway has been dismantled and Cyprus is too small for flights within the island – and too small for boats to be of any practical use along any of the 35 streams within the country, most of which are impermanent – roads are the only way for people to travel. This is most commonly done by car or other internal combustion engine vehicle, but it can also be done by cycling.

Is cycling popular in Cyprus?

While not as popular as in some places, such as the Netherlands, Cyprus nonetheless has a fairly strong cycling culture. This is due in large part to its good weather, adequate road system, and unique terrain, which offers breathtaking views. Cycling for purely transport purposes is becoming more popular, but it still remains more of a leisure activity than a mode to get from point A to point B. Cyprus has also become a firm favourite and a sought-after destination for visitors to cycle for leisure.

In short: not very popular. Public transport is limited to buses, minibuses, and service taxis (stretch taxis that run on predetermined routes) since the train network has been shut down and the island is too small for domestic air services. With that being said, Cyprus is still served by a number of buses and minibuses every day, which can get passengers to their intended destinations, albeit much slower than by car. Main routes have buses running every 1-2 hours, with increased frequency in the summer.

Cars in Cyprus – how important are internal combustion engine vehicles?

Cyprus is among the EU member states with the highest number of cars per inhabitant, and the number is growing fast, Eurostat figures published on Thursday show.

Among EU countries, Luxembourg recorded the highest ‘motorisation rate’ with 676 passenger cars per 1,000 inhabitants in 2018. However, cross-border workers using company cars registered in the country may influence this figure. Luxembourg was followed by Italy (646 cars), Cyprus and Finland (both 629 cars).T

How many cars are there in Cyprus?

How many electric cars are there in Cyprus?

Cyprus aims to see electric cars make up at least one-quarter of all newly registered vehicles per year by 2030 – but at present, the country is nowhere near this number. The country does not have even one charging point per 100 km for electric vehicles, making it only one of 10 European countries to not reach this mark. To put this in more perspective, it made headlines in October 2021 when the Cyrpus Ministry of Transport announced the purchase of four electric cars to use for government purposes – not 4,000, or even 400. Just 4.

Energy sources in Cyprus – what runs the country?

The Cyrpus energy mix is undergoing expansion into renewable capacity, since aiming to meet EU mandated reductions in carbon emissions requires increased investment in power generation from renewable energy sources (RES) at both commercial scale and individual building scale, as well as a major transformation of road transportation.

Cypriot RES: What are the most popular renewable energy sources in Cyprus?

Production from RES currently stands at 157.5 MW from wind, 125 MW from solar, and 12.8 MW from biomass.  The ROC anticipates an additional capacity of 360 MW to be installed by 2023 but wants to raise total RES penetration in the electricity sector to 700-750 MW, mostly through solar power.  However, storage technologies will be of paramount importance to reach that target unless or until the EuroAsia Interconnector cable comes on line, which is no sooner than 2030.

Industry in Cyprus – an overview

The main industries in Cyprus are tourism, food and beverage processing, cement and gypsum, ship repair and refurbishment, textiles, light chemicals, metal products, wood, paper, stone and clay products. Cyprus is considered an “easy” country to do business in, with an “ease-of-doing-business” rank of 54th out of all the countries in the world. Exports totaled $2.805 billion in 2017 (est.), and were increasing until the COVID-19 pandemic put a halt to global trade and created lingering supply chain problems. However, before and even during the pandemic these main industries account for the majority of CO2 emissions in Cyprus each year.

What can be done to lower CO2 emissions in Cyprus?

Cyprus is lagging behind the rest of the EU and needs to do more to reduce CO2 emissions quickly. Not only is more renewable capacity needed, but there needs to be a better plan to increase the adoption of electric vehicles. Fortunately, since Cyprus has such a small population and the average annual CO2 output per capita is still much lower than countries such as the United States and Canada, the country’s overall contribution to global greenhouse gas emissions will remain small even if they do not reach the targets and goals that they set.

Reducing CO2 is a task we must undertake together, across all regions and borders – and Cyprus has the potential to be a real leader on this issue. Global success in achieving climate goals depends as much on the government as it does on businesses and individuals – without multifaceted cooperation, we have no chance of reducing our emissions.