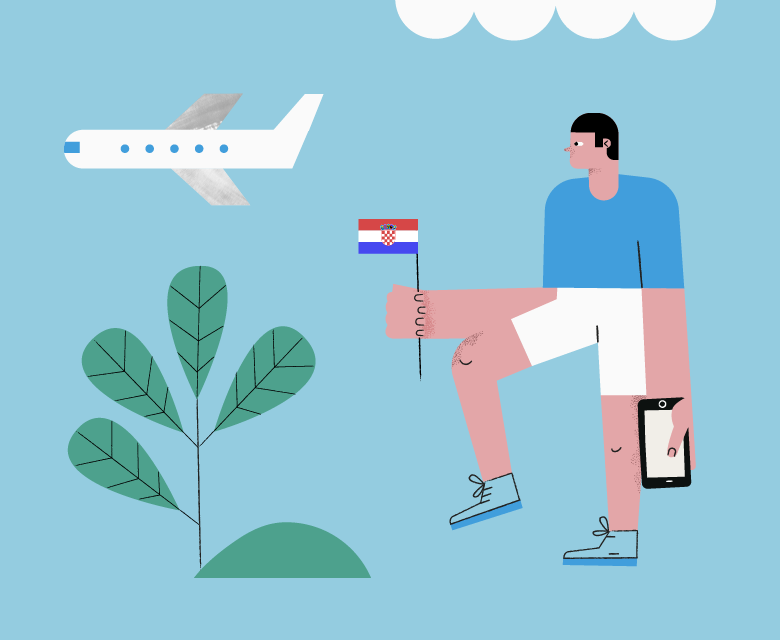 Croatia is a beautiful gem nestled along the Mediterranean coast, with idyllic beaches, hot summer sun, and a strong culture. One of the former Yugoslav republics, the country opens up to the Adriatic Sea on the northwestern part of the Balkan Peninsula. It is a small but very diverse country geographically, which plays an important role when it comes to CO2 emissions in Croatia.

This article describes all aspects of CO2 emissions in Croatia and elaborates on various factors that will determine the future of the country’s carbon footprint.

CO2 emissions in Croatia per capita

How much GHG does an average person emit in Croatia? This number is not only the sum of emissions from individual commuting, shopping, or energy use. In terms of calculating the average emissions of a citizen, first we need to calculate the total emissions of a country (including the entire amount from industry, transport, and production) and divide this figure by the number of its inhabitants.

The average Croatian citizen emits a little over 4 metric tons of CO2 per year (around 4.3 tons), as of 2020. This number has risen and fallen over the past few decades, which saw emissions per capita drop after the breakup of Yugoslavia, only to steadily rise from that point onwards. However, in recent years, CO2 emissions have begun to fall again, down more than 1 ton per person since 2007, when Croatians emitted more than 5.3 tons per capita per year.

What creates CO2 emissions in Croatia?

Croatia’s transport sector has accounted for the largest share of the country’s emissions since data has been kept on this statistic. In recent years, however, it has become even more of an issue: between 2005 and 2020 transport emissions in Croatia increased by nearly a quarter, bringing the sector’s share of total emissions from 18 % to 28.3 %.

Is cycling popular in Croatia?

Croatians have been touring the world by bike for decades – and mass cycling quickly emerged in Croatia after the advent of the safety bicycle in Europe. Today, cycling in Croatia is growing in popularity due to the ability to cycle in every season alongside gorgeous landscapes, through the river valleys, hills, and mountainous areas – and, of course, the country’s beautiful Mediterranean coast. Cycling is also becoming more popular in urban areas, with nicely paved roads and drivers that share the road with bicycles.

Buses, trains, and public boats are all common forms of public transportation in Croatia. The most common of all  is the bus, is still the most widely used and most affordable means of transport in the country. Croatia’s bus routes cover everywhere, from urban areas to rural settings – and buses run regularly, even at night on popular routes. Because of this, buses are very crowded in summer when there are additional visitors in the country on top of the regular Croatian transport users.

Between 1990 and 2011, there was a continuous growth trend in the number of automobiles within Croatia. However, in 2012 this value decreased – though it was a very short-lived reduction. Since 2012 there has been a steady rise in the number of internal combustion engine vehicles on Croatia’s roads. In 2018 there were about 1.67 million registered passenger cars in the country, which increased by over a quarter million by 2020. .

How many electric cars are there in Croatia?

Energy sources in Croatia – what runs the country?

Croatia gets the bulk of its energy from hydropower, followed by imported coal, oil and gas, and wind. Croatia’s energy mix consists of 7784.8 GWh of hydro, 2313.9 GWh of oil and gas power, 1452.6 GWh of imported coal, and 1335.4 Gwh of wind. Biomass is also present, but only contributes 315.2 GWh; solar is even less impactful, with only 74.9 GWh generated in the entire country.

Croatian RES: What are the most popular renewable energy sources in Croatia?

Hydropower is by far the most popular RES in Croatia, with wind being the only other renewable to make up a significant amount of the energy mix. Renewables and energy efficiency development was held back for many years by Croatia’s relatively small incentive quotas for wind and especially solar. In line with EU State aid rules, Croatia has now switched to “auctioning and feed-in premiums rather than feed-in tariffs, but delays in adopting the implementing legislation and adopting new energy and climate strategies created uncertainty regarding the country’s future plans,” according to Bankwatch.

Much time and resources have also been lost on pushing outdated projects to be run on imported coal, as well as the 450 MW Peruća gas power plant, and large-scale hydropower projects in sensitive locations that did not pan out well. These have all been cancelled, however, a highly unpopular and weakly justified floating LNG terminal is still planned to go ahead, with financial support from the EU.

Industry in Croatia – an overview

The main industries in Croatia have traditionally been focused around agriculture, forestry, and mining. Today, these still play an important role in the country, but are joined by food manufacturing, potash production, shipbuilding, leather and footwear production, the textile industry, and several others. The food and beverage industry alone accounts for nearly a quarter of Croatia’s total manufacturing revenue, with metal processing and the machine industry, including vehicle production, accounting for another 20%. Refined petroleum production, chemical production, pharmaceuticals, plastics, electronics, textiles, and building materials production all combine to account for more than half of total industry revenue in Croatia.

What can be done to lower CO2 emissions in Croatia?

Croatia is lagging behind the rest of the EU and needs to do more to reduce CO2 emissions quickly. Not only is more renewable capacity needed, but there needs to be a better plan to adopt renewables in the near future. Fortunately, Croatia’s per capita emissions are not overly high, and when combined with the relatively small population, results in a relatively small contribution to overall global greenhouse gas emissions.

Reducing CO2 is a task we must undertake together, across all regions and borders – and Croatia has the potential to be a real leader on this issue. Global success in achieving climate goals depends as much on the government as it does on businesses and individuals – without multifaceted cooperation, we have no chance of reducing our emissions.