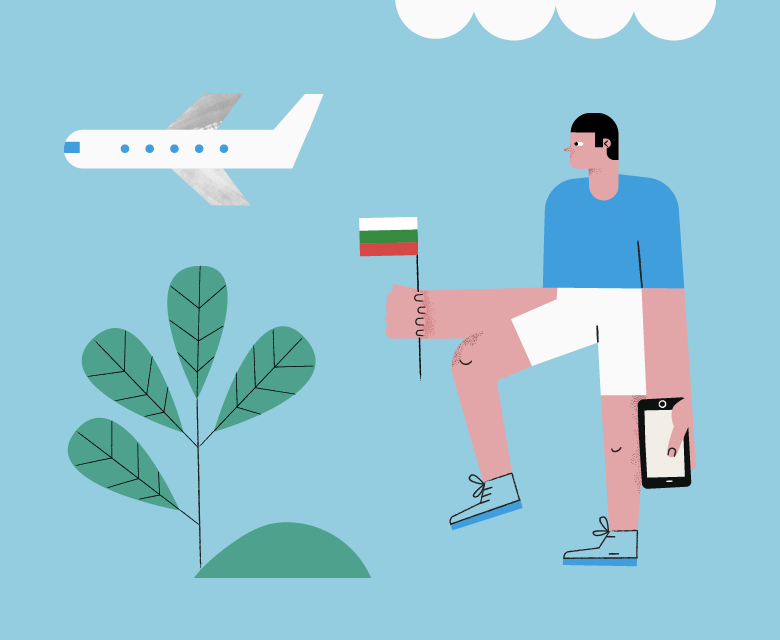 Bulgaria is an often overlooked country nestled along the Black Sea coast in the Eastern Balkans. The country has been undergoing a slow and sometimes difficult transition to an open market economy since it regained independence from Soviet Communist rule, which came about shortly after the Second World War. Now, Bulgaria is full-fledged member of the EU and Nato, with increasingly stronger ties to Western European nations – and along with this development has come an added benefit: CO2 emissions in Bulgaria have actually been decreasing as the country moves towards greater prosperity.

This article describes all aspects of CO2 emissions in Bulgaria and elaborates on various factors that will determine the future of the country’s carbon footprint.

CO2 emissions in Bulgaria per capita

How much GHG does an average person emit in Bulgaria? This number is not only the sum of emissions from individual commuting, shopping, or energy use. In terms of calculating the average emissions of a citizen, first we need to calculate the total emissions of a country (including the entire amount from industry, transport, and production) and divide this figure by the number of its inhabitants.

What creates CO2 emissions in Bulgaria?

The power industry creates the vast majority of CO2 emissions in Bulgaria with a little over 64% of total emissions coming from this sector. The transportation industry is the next biggest with a comparatively smaller yet still significant 15%. Every other sector is responsible for less than 10% of total emissions, including non-combustion activities (9%), other industrial activities (8%), and buildings (4%).

As mentioned above, Bulgaria’s transport sector has accounted for 15% of total emissions in 2020. This is interesting to note because in 2014 this number was 4.5% higher at 19.5 %. CO2 emissions in Bulgaria’s transport sector increased from 8% in 1995 to 19.5 % in 2014, with an annual average growth rate of 5.29%. It is therefore encouraging that emissions from transport have decreased nearly 5% over the past half-decade and show signs of continuing to drop.

Is cycling popular in Bulgaria?

Since the fall of communism in the country, Bulgaria has witnessed changes in every aspect with regard to cycling. This includes the numbers and share of bicycle trips, the development of cycling infrastructure, and the social and cultural significance of using bicycles as a mode of urban transport. When it comes to non-locals, however, Bulgaria remains one of the least visited cycling destinations in Europe – though those that do venture to the country with a bike in tow will discover a beautiful country that is picturesquely perfect for cycling. On top of the mountains, lakes, and rivers, there is the Black Sea coast with forests and inviting becahes, making any point along the way a perfect start or end point for a cycling trip in Bulgaria.

How many cars in Bulgaria

Between 1990 and 2015 the number of passenger cars in Bulgaria continuously grew, resulting in a peak of 3.2 million at the end of this period. SInce 2015 the number of cars in the country has declined, with about 2.8 million persnoal vehicles registered as of 2018.

How many electric cars are there in Bulgaria?

Energy sources in Bulgaria – what runs the country?

Bulgaria’s power sector is diverse and well developed, with universal access to the electrical grid and numerous cross-border connections in neighbouring countries. Environmentally-friendly, efficient and secure energy is critical for Bulgaria’s future. While the country is currently dependent on imported fuels from Russia,  Bulgaria manages to have an annual energy surplus and is a net exporter of electricity. Anticipated future consumption within the country should grow slowly, allowing Bulgaria to develop itself as an energy hub.

Bulgarian RES: What are the most popular renewable energy sources in Bulgaria?

Hydropower is the most utilizes renewable energy source in Bulgaria, with approximately 14% of the total installed capacity. Electricity generation from hydro not only makes a substantial contribution to meeting the increased electricity demand, it is also the most used source of energy that is not a fossil fuel or nuclear-based electricity generation technology. In 2019 Bulgaria pledged to update its national target for renewable energy, aiming to raise the share of wind, solar, and other renewables to 27% of total energy consumption by 2030.

Industry in Bulgaria – an overview

The main industries in Bulgaria have traditionally been focused around agriculture, forestry, and mining. Today, these still play an important role in the country, but are joined by the metallurgical industry, electricity generation, electronics manufacturing, machinery and equipment manufacturing, shipbuilding, petrochemical production, cement production and construction, textiles, food and beverage production, and mining. In addition, tourism has become a main industry in recent years, and contunues to grow with an influx in remote workers taking advantage of the natural beauty and relatively low cost of living, as well as with intrepid tourists in search of mountain vistas and Black Sea beaches.

What can be done to lower CO2 emissions in Bulgaria?

Reducing CO2 is a task we must undertake together, across all regions and borders – and Bulgaria has the potential to be a real leader on this issue. Global success in achieving climate goals depends as much on the government as it does on businesses and individuals – without multifaceted cooperation, we have no chance of reducing our emissions.