The ozone hole: a story that inspires eco-action!

Suppose you remember the 1980s, Madonna's hits, and new episodes of Dynasty. In that case, you also probably remember reports about the harmfulness of aerosols and refrigerants in fridges and freezers and discussions about the need to protect the ozone layer. Thanks to the global action taken at the time, the localised disappearance of the ozone layer, referred to as the ozone hole, has been halted, making it one of the greatest successes in the history of transnational cooperation on climate and environmental protection. We should keep this in mind as we are facing the next challenge right now!

The ozone hole phenomenon may reoccur if the world does not comply with the Montreal Protocol.

Ozone is one of the oxygen varieties. The ozone molecule contains three atoms (O3), making it one more than oxygen, which is the primary component of air (O2) we use to breathe. This third oxygen atom makes ozone a strong photochemical oxidant, unlike the two-atom oxygen molecule. Depending on the atmospheric layer in which it is found, the role and impact of ozone on the environment may be positive or negative.

It is undoubtedly harmful in the troposphere, the lowest layer of the atmosphere, where smog forms. On the other hand, thanks to its properties, in the ozone layer, the upper atmospheric layer, ozone absorbs ultraviolet radiation with a wavelength of less than 295nm almost completely. This is, naturally, good for people as this type of radiation is harmful to live organisms. Thanks to ozone, only a few per cent of biologically active UV radiation reaches the Earth’s surface.

The ozone hole is related to human activity

Ozone forms and decays when exposed to sunlight. Hence, fluctuations in it are recorded annually, and the natural state of the ozonosphere varies with latitude. The average thickness of the ozone layer is 300 DU (Dobson Unit) which is just 3 millimetres, and the area where it falls below 220 DU is called an ozone hole.

As early as the mid-1970s, scientists noted an apparent decline in stratospheric ozone, and after 1979 similar observations occurred with increasing frequency. The most significant ozone holes were observed in the polar regions, especially over Antarctica. It was soon proven that the phenomenon was anthropological, i.e. related to human activity. Specifically, the ozone hole is directly related to increased emissions of CFCs and halons, both used in producing aerosols, solvents, refrigerators, freezers, and air conditioners.

The scientific evidence was growing, and the adverse effects of the disappearance of the ozone layer were also being talked about loudly. The message reached the decision-makers. In 1985, the United Nations signed the Vienna Convention. This document obliged the parties to measure atmospheric ozone levels, reduce emissions of ozone-depleting gases and conduct research on the effects of ozone depletion.

In 1987, the Vienna Convention was supplemented by the Montreal Protocol on Substances that Deplete the Ozone Layer (ODS). The treaty was the first ever to be signed by all countries in the world. The signatories thus committed themselves to phase out the production of designated substances, with eight initially listed: chlorofluorocarbons (CFCs); halons; carbon tetrachloride (CTC); 1,1,1-trichloroethane (TCA); hydrochlorofluorocarbons (HCFCs); hydrobromofluorocarbons (HBFCs); bromochloromethane (BCM) and methyl bromide (MB). Currently, there are more than 200 different substances on the list that have a high ozone-depleting potential.

The provisions of the Montreal Protocol were amended several times to finally ensure a decrease in the concentration of harmful substances in the atmosphere in the 21st century. The latter, adopted in 216 in Kigali, no longer concerned the ODS but hydrofluorocarbons. These began to be used as a replacement for the substances previously covered by the protocol but were eventually proven to exacerbate the greenhouse effect.

Patching up the ozone hole

The provisions of the Montreal Protocol thus phased out the use of 99% of ozone-depleting substances. Companies have gradually stopped using them. Thanks to the global debate, the public has become more aware of the risks, necessities, and benefits of making environmentally friendly choices. As old appliances and products were withdrawn from the market, CFC emissions into the atmosphere decreased. 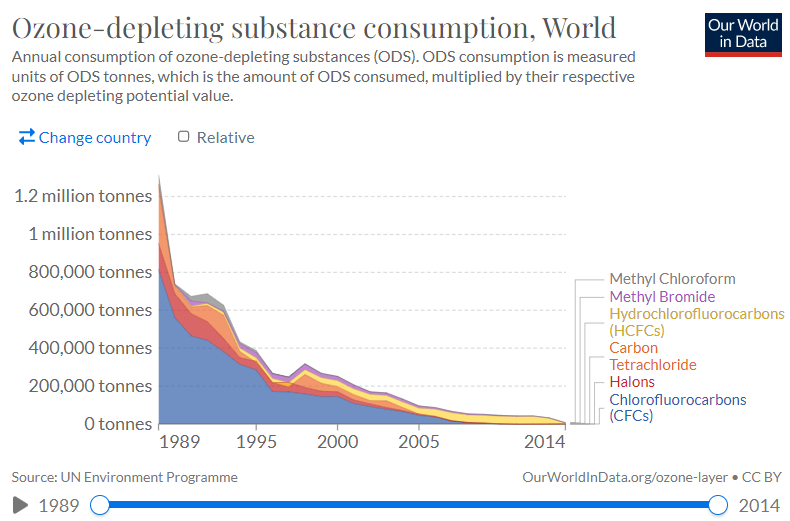 The lifespan of CFCs is long, so no immediate effects were expected. However, these can already be observed – scientists report that the ozone hole is gradually shrinking. It is also estimated that by the middle of the 21st century, the situation should return to what it was in the 1980s. And that is a great success for science, industry and the community that we must remember!

The ozone hole is not all. New challenges are ahead of us.

The ozone hole phenomenon may reoccur if the world does not comply with the Montreal Protocol. Another reason to keep this in mind is that there are new challenges, i.e., mitigation and adaptation to climate change. And just as the world acted together almost 40 years ago to reduce CFC and halon emissions, today we face the need to reduce greenhouse gases.

The whole community needs to mobilise! The good news is that we can reduce CO2 emissions every day by making greener choices. Join the TerGo community and discover what you can do and what climate action is taken worldwide!